Whilst reading al-Ghazālī’s Iḥyāʾ ʿulūm al-dīn, I came to think of a new way to visualize both my archive and my back up strategy. The passage, in Book 35, goes as follows:

So let us explicate: faith in divine unity has four stages, and may be divided into its core, its innermost core, its shell, and what contains its shell. To accommodate weak understandings, let us liken this to a nut within its husk: for there are two shells, and a core, and the innermost core contains oil.

Thinking this over, I realized my own archiving and back up practices are close to what Ghazālī is describing here. As such, I made adequate adjustments and finally came up with the following set up: 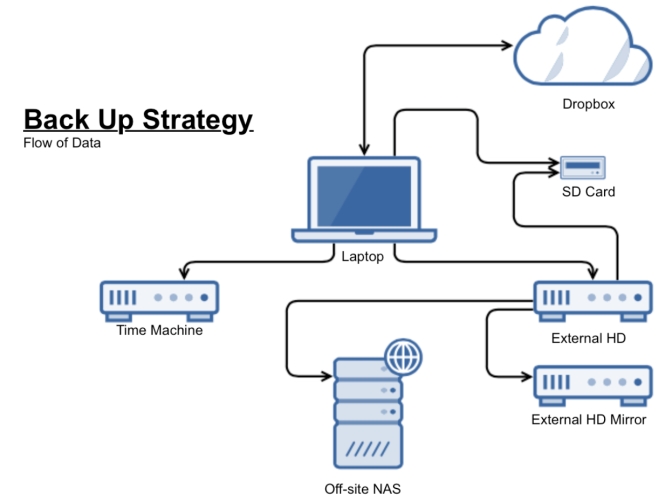 Translating al-Ghazālī’s simile of the nut, the diagram translates into the following: 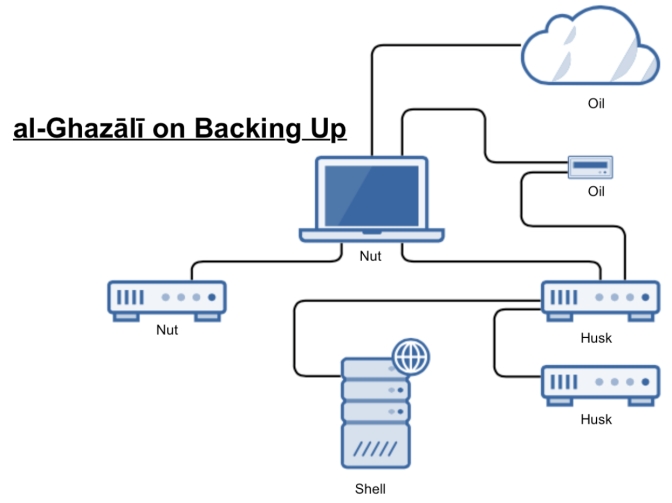 This diagram in fact does not speak so much about backing up, as it does about archiving. Every term represent a different set of files, with different levels of being mission-critical. Oil are those files I am currently working on and are produced by myself. No one but me knows (or cares) they exist. Nut are all oil files, plus those sources that are highly permanent to my work and which I use frequently, in my case primary sources and secondary literature on Islamic philosophy. Husk are all nut files, plus those sources which could be useful but which I definitely do not often, in my case literature on other subfields of Islamic Studies, and adjacent fields such as History of Philosophy and Medieval Studies. Shell are all husk files. As we can see in the diagram, each stage is doubly executed, allowing for a certain measure of safety. If you want to mix in your private files (music, photos, videos, etc.), I suggest to do it at the husk and shell stages.

At the moment, I think this amount of effort is good enough for a simple student or scholar. By no means is this a watertight system, but if I lose my files, I can safely say I did my best. Let me know what you think in the comments.

2 thoughts on “al-Ghazālī on Archiving and Backups”