In this post I will respond to some points raised by Titus Nemeth. I already discussed his rhetoric so I will side-step that in this post.

I say: Arabic was developed to be written with pen and ink, this translates badly in (digital) printing.

He objects: So did all other scripts, e.g. Latin and Chinese, so this needlessly romanticises Arabic.

I respond: For both Latin and Chinese, most scripts were largely developed on a ‘per letter’ basis or did develop so in that direction, before the printing press was invented. No matter the position of the letter in a word, you write it the same. This makes it possible to isolate the letter, and stamp or encode it individually. Arabic’s scripts show a great variety of the shape of a letter, depending on the position in a word. These scripts are more developed on a ‘per word’ basis. That works great when you glide your pen over paper, but, as I said, translates badly in (digital) printing.

He objects: You only showed an example from a publisher in the Netherlands, but publishers in Beirut, Cairo, and Istanbul produced beautiful Arabic print.

I respond: I’m sure you can find some examples of nice looking Arabic print (mind you: he did not give a specific example, just claimed that there are). But the majority of printing just sucked. Here is an example from Cairo, at a time when I was not at all thinking about these issues: In my article An Ottoman Commentary Tradition on Tahāfut al-falāsifa published in Oriens vol. 43, pp. 368-413, I say the following in footnote two:

I will cite multiple sources, including a manuscript, as the printed version is not a critical edi- tion and difficult to read. The manuscript was chosen for three reasons: 1) it may be old if we are to trust the date, 2) it has been collated, 3) I find it to be written in a most elegant hand. […] Khojazāda, Tahāfut al-falāsifa (Cairo: al-Maṭbaʿa al-iʿlāmiyya, 1303/1884–5); Khojazāda, Tahāfut al-falāsifa, ms Beyazid Veliyyüddin 1990 (Istanbul: 919 h.);

Here is an excerpt from the manuscript and from the print (click for larger version): 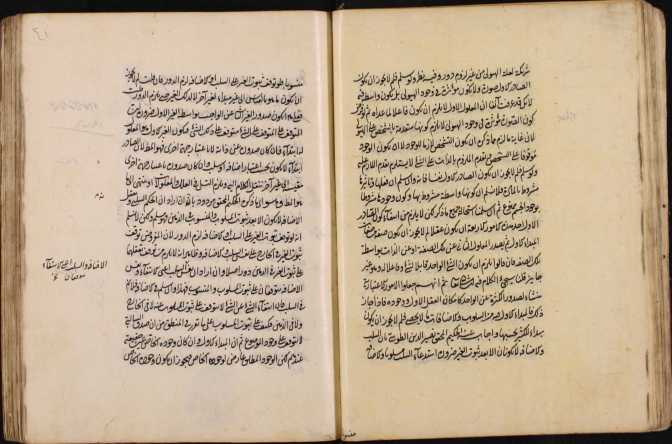 Just look at how this fī is written, the joy of the scribe is palpable:

I love reading it.

The print, however, ugh.

I am not denying there are no beautifully printed works, but the reality for us scholars are these walls of texts. As I admitted in my article, I’d rather read from a manuscript than from this printed book. It’s a problem.

I say: Let’s talk about digital encoding of Arabic.

He objects: The history of the 20th century is important to trace, to see how 19th century printing and digital encoding are related (however, no reasons are given).

I respond: As a user, I don’t see the immediate relevance, but yes, please do look at his book Arabic Type-Making in the Machine Age if you want to know more. You might as well take a look at newly published The Arabic Lexicographical Tradition while you’re at it.