Those familiar with my work may be aware of my research on Christian-Muslim Relations (CMR) in China and Japan which has been published in Islam and Christian-Muslim Relations and Brill’s Christian-Muslim Relations: A Bibliographical History. As one of the few scholars engaged in the field, especially in regards to Japan, a large portion of my time has been spent identifying and locating sources. In this post, I intend to introduce readers to some digital repositories and databases that I have used whilst researching CMR in China and Japan. This post is based on some of the Digital Orientalist’s earlier content from 2015 including “Online Searchable Dictionaries for Islamic Studies: A Preliminary List” and “Full-Text Online Arabic Sources: A Preliminary List“.

Researching CMR in East Asia has followed a two-step process. Firstly, I have sought to identify potentially relevant authors and texts. Secondly, I have sought to locate and read those texts. As such, there are two primary types of digital resources that I have used in my research on CMR, those which help me to identify texts and authors, and those that provide me with a digitized version of a given text. In this post, I focus on the former category; digital resources that are useful for identifying relevant authors and texts related to CMR in East Asia. The list only includes resources that I have used on multiple occasions.

Unlike some other fields, academic interest in Christian-Muslim Relations in East Asia is in its infancy, so to the best of my knowledge, there are no repositories or databases devoted wholly to its study. As such, the reader will note that most of the resources listed below were designed for other or more general purposes.

1. Biographical Dictionary of Chinese Christianity – A biographical dictionary that allows users to search for prominent, historical Chinese Christians and missionaries to China. This can be used to identify potentially relevant authors and their works. Also available in Chinese. Free.

2. Christian-Muslim Relations: A Bibliographical History – Although entries in this series have been one of the products of my research, this bibliographical history is now a resource available to other scholars wishing to identify authors and sources pertaining to CMR in China and Japan, and elsewhere. Subscription (for online edition). 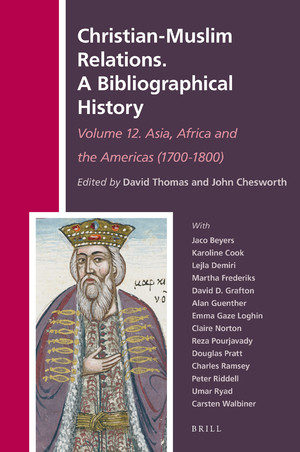 3. CiNii – CiNii is a database for searching for books, papers, and journals, and is similar to WorldCat. For those who are based in Japan like me, it is a highly useful resource for discovering the physical location of texts and sources. I have used it in conjunction with the other databases and repositories listed herein in order to locate physical copies of pertinent texts in libraries close to me. Nevertheless, those researching CMR in East Asia from other countries will likely find WorldCat or other online catalogues more useful. CiNii is available in English and Japanese. Free.

4. Laures Kirishitan Bunko Database – This database has limited application for a researcher of CMR in East Asia since it is primarily useful for locating texts pertaining to Roman Catholicism in 16th and 17th Century Japan. Nevertheless, texts from the Japanese mission field were often printed alongside those from other missions in Asia. As such the database is useful for finding some earlier sources pertaining to CMR in East Asia. The database indicates the physical location of the text and occasionally includes digitized versions. It is also available in Japanese. Free.

5. The Chinese Christian Texts Database – A database of primary and secondary sources on Sino-European interaction between the 16th and 19th Centuries. The database allows the user to identify the physical location of texts. Free.

6. The Muslim World – Journal published since 1911 on Islam and Muslim societies and CMR. I have been able to identify texts and authors by following the citations of some of the journal’s earlier authors. Free and Subscription (dependent on volume and/or article).

7. The University of Zurich’s Institute for Asian and Oriental Studies China and the West Chronology – A lengthy chronology of the history of Sino-Western interaction including bibliographical information for numerous primary and secondary sources. Written in German. Free.

Part of a paper by Hosaka Shūji.

8. The Work of Hosaka Shūji – Hosaka Shūji (保坂修司) has conducted extensive research on the history of Japan’s relations with the Middle East. When I began to research CMR in East Asia, I found his work useful for identifying authors and sources pertinent to CMR in Japan and for gaining knowledge of the historical context of CMR in Japan. Very little of his work has been digitized, but the following two papers are particularly useful:

An extensive catalogue of Hosaka’s work can be found on the aforementioned CiNii, here.

In this post, I have sought to introduce readers to some digital resources useful for identifying authors and texts pertinent to CMR in East Asia that I have used in my research. The ongoing publication of the Christian-Muslim Relations: A Bibliographical History series means that many relevant authors and sources can now be identified through recourse to this book series and its online counterpart. Nevertheless, the resources listed above remain indispensable for those wishing to research CMR in China and Japan who lack access to Christian-Muslim Relations: A Bibliographical History or indeed to locate authors and texts not included in the series.

In the second part of this post, I will introduce readers to the repositories that I have used to access digitized versions of relevant texts.

3 thoughts on “Databases and Repositories for the Study of Christian-Muslim Relations in East Asia: A Preliminary List (Part 1)”