Why Shamila? Arabic Libraries on your Computer

The most famous Arabic digital library (both online and on computer) is al-Shamila. It contains roughly 7260 Arabic books (when this post was written) on the various ِArabic (mostly Islamic) sciences and literature genres. Shamila comes with a desktop application to make access easy. The main problem of al-Shamila desktop application— apart from its clumsy interface — is that it only works on Windows. Running the al-Shamila .exe file on Mac in Wine application does not do the trick,  even though Wine works with almost all other applications such as notepad++ (see below).

The other option will be is to either run a so-called virtual machine, which runs Windows. To integrate this into the regular MacOS user experience you can use Parallels or CrossOver. Yet, both are unstable and buggy, not to mention that one will need to set the language on their Mac to Arabic and everything will go right to left. The better solution is to run the program in VirtualBoxVM (see this post on DO), but honestly why do this if all you want is Shamila.

For some reason the programers (AbouZakaria & kovax) who created it transliterate the program’s name as Elkirtasse, so we will stick with that. Elkirtasse  works on a whole slew of operating systems such as Linux, Windows, Ubuntu, Opensuse, Fedora, Haiku, and MacOS (formerly known as OSX). The application’s graphic resolution on mac may be a bit low, but if anything that contributes to the application running smooth as soft butter. As for the books, the programers decided not to reinventing the wheel, the program simply uses the books of al-Shamila; you  can import them or add them from elkirtasse website in their native elkirtasse .xml format. The program is open source, free, and pretty stable, smooth, and powerful.

There is in fact another program. The other program that one can use is أسفار that has, in my opinion, only one advantage over القرطاس; its just looks better. Asfar can be downloaded from the Mac app store for free. The main problem with Asfar is its slowness, it is buggy, and crashes for any (or no apparent) reason.

Another problem that I have with Asfar is the search engine. Unlike Elkirtasse, if you are reading a book in Asfar you can only search for a word in the current page. If the searched word is not in the current page the application will jump to the first word appearance in the text without giving you a a separate window or a tab for the search results.

In Asfar, you can see how long it took the program to spit the results.

In Elkitasse, you can immediately jump to the result pages.

Take for example a search for the root Khamr (in Tafsīr al-baghawī) Asfar returned only 59 results while Elkirtasse 167, meanwhile al-Shamila —both online and the desktop application— returned 15! And you can see using Elkirtasse how much easier one can select and search: book, books, collection e.g. all the tafsīr books.  Plus you have the advantage of searching for word-root, search for several words (together in a page or separated), and search for the word in the first line in the book pages, and save the search results for later. 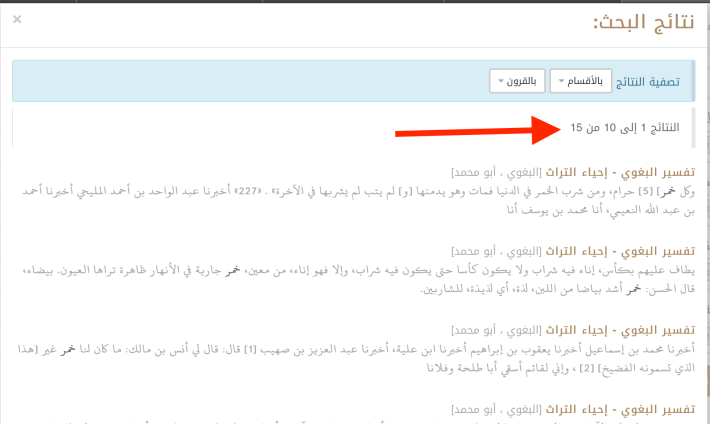 My main problem with Asfar is that you can’t add new books to it. In other words you are stuck with what the programer (Nayef Āl Mansī) decided to put there. The programer took the books that were available on al-Shamila when he released the program in 2012. Therefore the last book in Asfar is this one from June 2012. Al-Shamila team added around 1200 book since then, you can’t read those in Alasfar.  I told the programer about this two years ago and he promised to work on it (see the picture below). Another unpleasant thing is his elimination of some books in Asfar, for example the encyclopaedic masterpiece Kitāb al-aghānī is not there.

On the other hand, in Elkirtasse you can create your own books, import text, html, and xml, and other files as books. You can export already existing book to a text file or html one. Unfortunately, the programers stopped updating the program since 2010 and some bugs like importing al-Shamila books (*.bok files) does not work on the Mac version. Also the link to update all the books automatically is a dead dropbox link. Other than that you can edit the books yourself, edit the table of content, open several books in tabs, print, search the table of content of one or several books,  add books to favourite, write your notes on the page that your reading, and make links between pages and passages from any book to any other one.

In short, Elkirtasse is an excellent application that makes it very easy to use the digital library Shamela. Its dead development cycle is a sore point which needs to be addressed. If you have questions (about installing or navigating etc.) do not hesitate to leave a comment below or send me a message on twitter.

“Edited on Nov 1: added a paragraph about Asfar unable to import nor add new books”