In the classroom environment, it can be difficult to create engaging materials that allow students to learn about the multi-causal nature of historical events and the difficulty with which historical decisions were made. Recently, I have been experimenting with Twine in order to create stories that allow students to roleplay as historical figures and make decisions that impacted the course of history. This article will focus on a story that I built on Twine and how I used it in one of my classes. 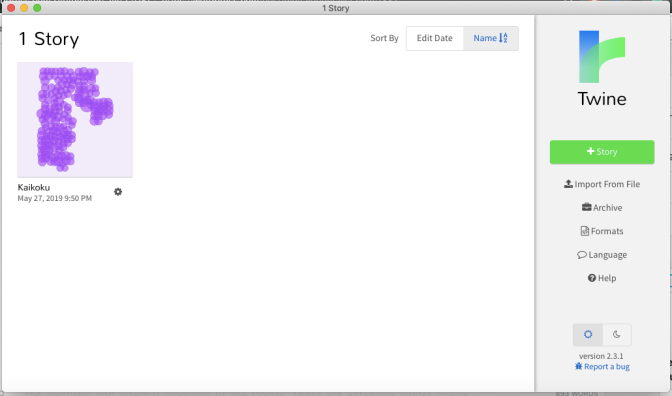 Twine is a piece of open-source software that can be used as either a browser-based or desktop application. It allows users to create interactive fiction and text-based games which are published to HTML and can, therefore, be run in a web browser. By default, Twine stories are written using Harlowe which is effectively a markup language used for formatting the story. Other story formats are also available including SugarCube and Snowman as well as an array of user made formats. Harlowe is simple to use and learn, but for those skilled in coding CSS and JavaScript can also be used in order to influence the aesthetic and internal workings of the stories. There are extensive guides online about how to use and troubleshoot Twine, including YouTube videos such as those by Digital Exposure TV and Vegetarian Zombie, Twine Wiki, and the Harlowe 3.0.1 Manual, and therefore I shall keep the technical discussion to a minimum. 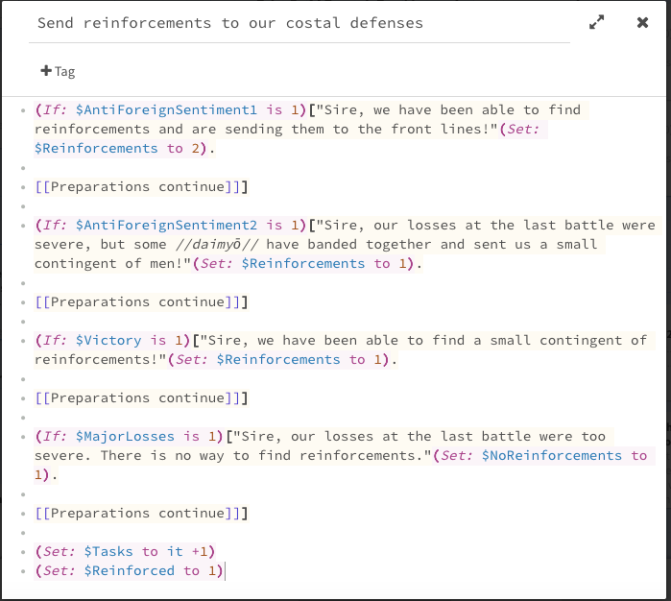 Using Harlowe to provide different outcomes based on previous decisions or events.

I decided to use Twine to create an interactive text-based game for my classes on the visits of Commodore Matthew C. Perry (1794-1858CE) to Japan in 1853CE and 1854CE. After providing some historical background, the game commences with the arrival of Perry in July, 1853CE. The player takes on the role of a fictitious and unnamed rōjū 老中 (E. chief senior councillor) in the service of the Shōgun Tokugawa Ieyoshi 徳川家慶 (1793-1853CE) partially based on the historical figure, Abe Masahiro 阿部正弘 (1819-1857CE). Almost immediately the player must decide how to react to the arrival of Perry’s ships. They are given options that will lead to outcomes that are either in line with historical reality or reflect potential alternative histories. For instance, the player can choose to make contact with the ships, agree to Perry’s terms, and agree to open two ports on his return the following year to provide a historical outcome. Alternatively, the player may choose to attack the ships and this can result in numerous alternative outcomes including, but not limited to, the player’s ritual suicide, victory over Perry’s forces, defeat and surrender, civil war, and Japan’s vassalage to the United States of America. Nevertheless, whilst the decision to act or not to act is in the hands of the player, the outcome of the story cannot be chosen. Through the use of conditions and variables each option that the player chooses throughout the story influences later decisions and their outcomes. The game also includes some random events such as the player’s potential assassination. Furthermore, the story includes some unrelated storylines that aim to reflect the passage of time and teach students about some of the roles of contemporaneous daimyō 大名 (E. Warlords) and rōjū. For example, a random event that sees hidden Christians discovered in the player’s domain may be triggered and require action from the player. By creating the game in this way, I hoped that my students would be introduced to the historical themes of the class, gain more general knowledge about the role of rōjū and daimyō in the late Edo period, and come to understand some of the difficulties that Japan’s leaders faced contemporaneously.

Since most of my students speak English as a second language, I decided that we would play the game as an entire class. This also meant that I wouldn’t need to upload my story to a sharing site and rely on potential poor internet connection. I loaded the game on my browser and read each part of the story asking my students to discuss and vote on each decision. The story progressed in the direction that the majority voted. For some reason, students across different classes always chose to progress down the historical storyline. However, following our completion of the game, the students wanted to see what happened if they chose a different path, so we would repeat the game a second and sometimes third time. In total, we spent around 30 minutes playing the game. Following this, the class would continue as usual with a short lecture on the arrival of Perry to Japan, reading, and a writing activity.

A random event in the game.

The story I created was a useful resource for my class that allowed students to gain some elementary knowledge of the class’s themes and the difficulties that faced historical decision makers. My students seemed to find the story engaging, and enjoyed the experience of making decisions and experiencing their outcomes. Furthermore, writing a story in Twine didn’t drastically increase the time I spent planning the class and preparing materials for it. I wonder about the extent to which the fantasy and alternative history elements in the story are useful, but these become necessary in order to write the sort of non-linear story that Twine was designed to create. My experimentation with using resources written in Twine is still in its infancy, however, it seems to offer great potential for creating digital, interactive resources that can be integrated into the history classroom. Although I do not plan to share the above-described game online until I have fixed some bugs and other issues, I hope that I can use the knowledge I gained creating it to build some other text-based games to use in future classes.